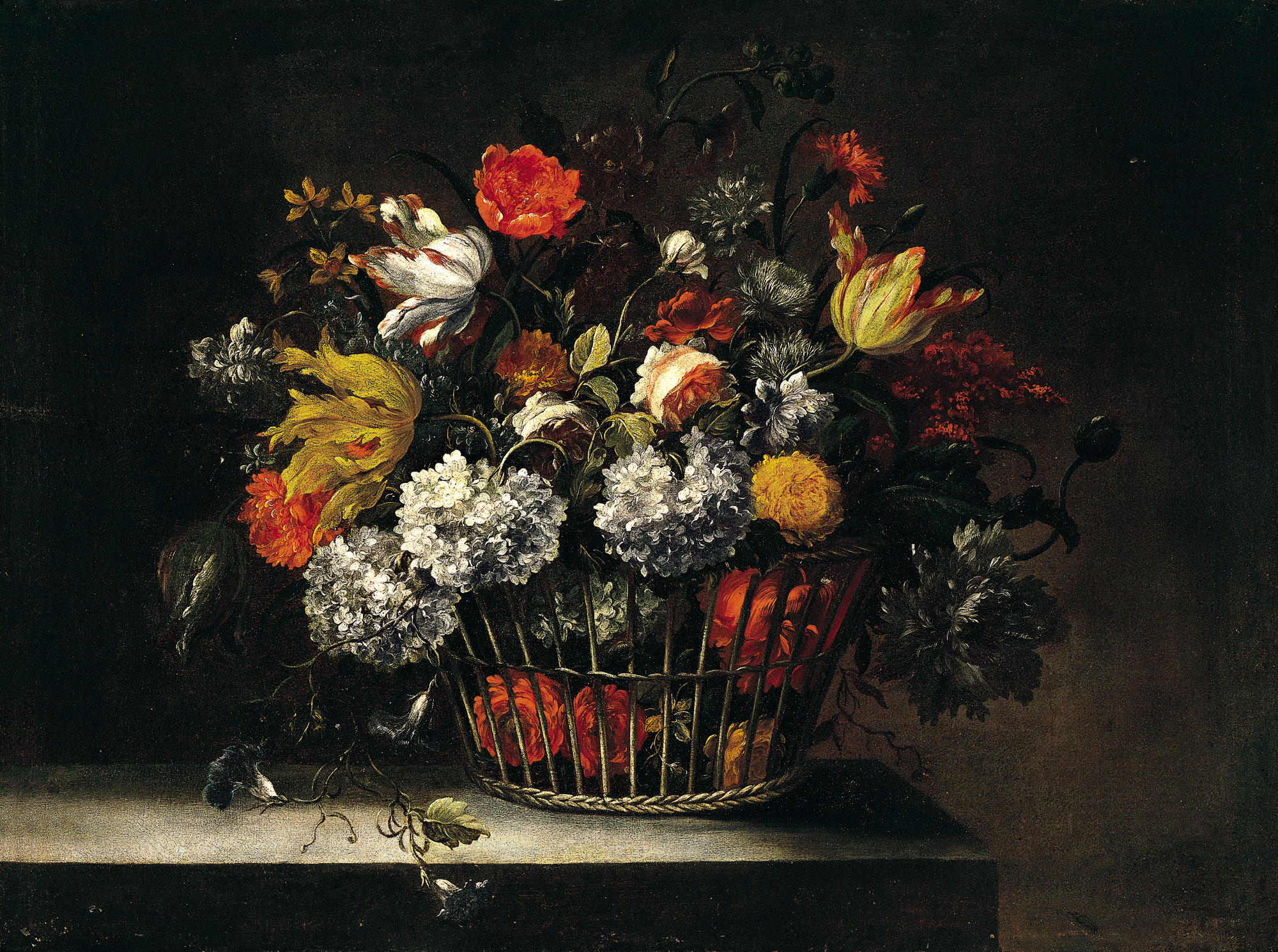 Close to the right-hand border of a stone table, at the centre of the composition, is a woven basket full of flowers. The light, coming from the left, falls sharply on the subject, which stands out vividly from the earthy shade of the background, giving the composition great expressiveness.

The painting, which is in a good state of conservation, has been remounted. However, it has to be said that the dark shades of the background, the surrounding area of the composition, and the shadows, have all darkened, perhaps due to the passing of time. This small alteration makes it difficult in particular to identify some of the varieties which make up the bunch of flowers.

The picture, attributed to the French painter Jean-Baptiste Monnoyer, became part of the Carmen Thyssen-Bornemisza Collection in 1995. Initially the attribution of the painting to Monnoyer was confirmed by Sam Segal who, in a later communication, noted that this still life could be the late work of another great French decorative artist of the 17th century, Nicolas Baudesson. Both painters, who were rivals in their lives, have in common, apart from the excellent quality of their oils and a considerable production, little disposition for signing their works. This fact has increased the difficulty in drawing up the catalogues of their respective oeuvre, which are gradually being defined.

This wicker basket is full of some of the painter’s favourite varieties, such as bellflowers (Ipomoea purpurea). Bellflowers with thin, flexible and curling stems which, twisted around the wicker rods, hang over the left-hand side of the basket, over the table and down the side of it. This strategy was widely explored in Flemish and Dutch 17th-century still-life painting, which Monnoyer probably came across during his stay in Antwerp.

The colour of the roses, anemones and tulips stand out next to the luminous whites of the four snowballs which show over the side of the basket. These lively and contrasting shades are mixed with the cold touches of the greenish and bluish leaves and backs in the centre of the bouquet, and of flowers such as the poppy, placed in the shaded right-hand side. The light brushstroke outlines and models the petals and nerves with soft touches of colour, especially light in shade, which emphasise the contours and the polished surfaces. These delicate and fine lines, with a white or yellow component, are visible in the calyces of the bellflowers, in the tips of the stems or in the anemones, where the yellow emphasises the small fragile petals of these flowers.

This basket is an example of Monnoyer’s simplest compositions, since this artist generally used more elaborate and decorated containers, surrounded by fabrics, tapestries, architectural or sculptural fragments. The baskets of flowers again point northward, as it was painters such as Osias Beert and Jan Brueghel who popularised this type of object. Similar compositions in Monnoyer’s works are found in Versailles and in the Trianon, although with bright backgrounds and a risen viewpoint.

According to Michel Faré, Monnoyer chose his flowers amongst those with the most opulent shapes, the rarest and brightest colours. In the opinion of this historian, the selection of his models depended on a previous definition of a hierarchy of the plant kingdom. In Monnoyer’s paintings we find, as Sterling pointed out, the answer to the Italian and Flemish Baroque still life, with a classical French touch.

A Bouquet of Poppy Anemones, York-and-Lancaster Roses, Double Camparnelle, a Hyacinth, a Tulip and Auricula Tied with a Blue Ribbon