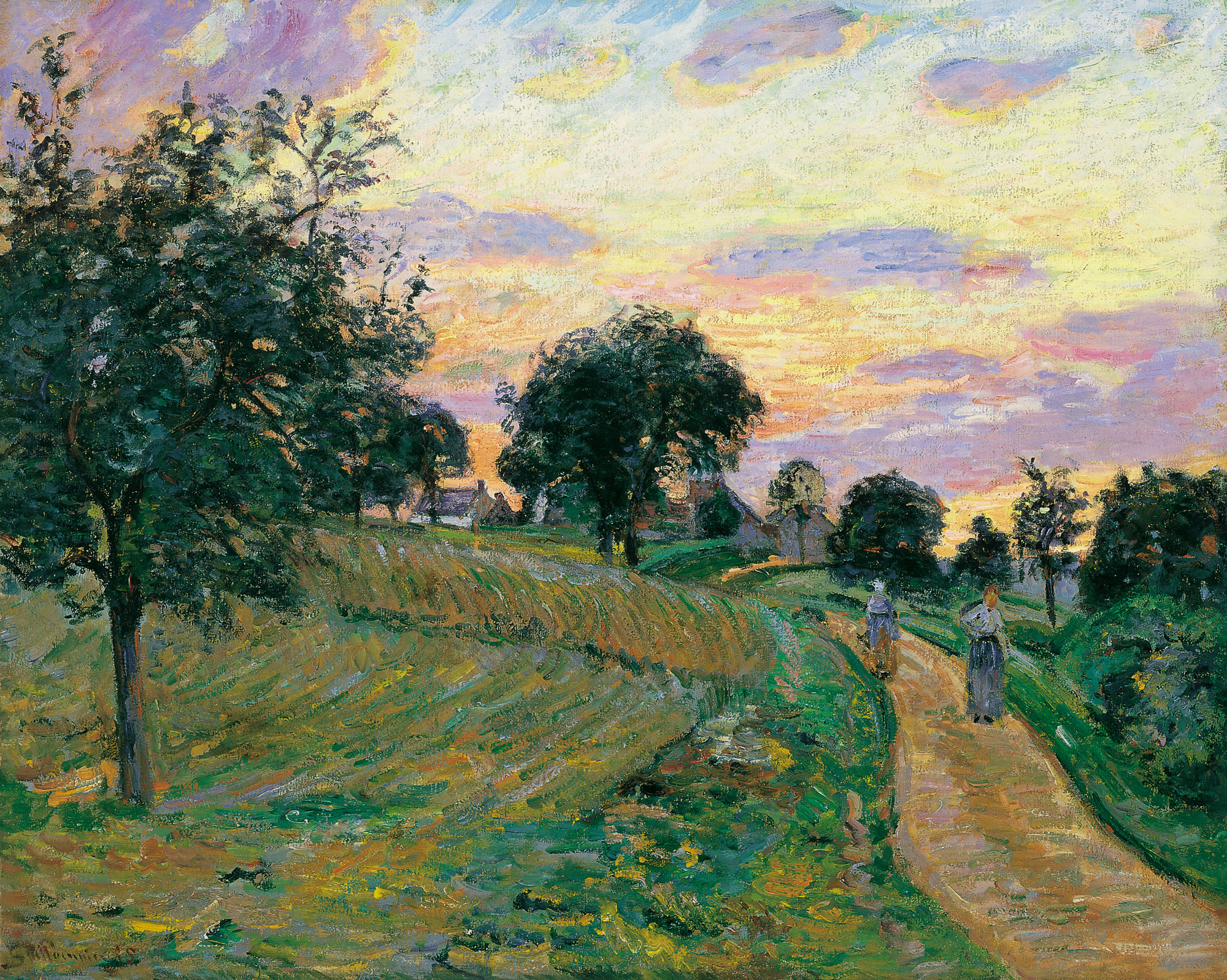 The dated works representing Damiette cover the years 1882 to 1888, but the artist had already discovered this village of the Île-de-France around 1880 during one of his “escapes” to the countryside in search for new subjects. He used horse-drawn barges to get there but also, being an ex-employee of the Paris-Orléans Railway, he knew how to make the most of the existing lines to reach, in the area of Orsay (Essonne), in the suburbs of Paris, villages further away than those visited until then (Charenton, Clamart, Meudon, Issy, Chatillon.). That is how he began to explore the valley of the Yvette, a small quiet river, and the nearby villages of Gif and Damiette, where he carried out a number of studies and painted a series of oils, three of which were shown in the exhibition at the American Art Gallery in New York in April 1886; among them was the Damiette, 1886 belonging to the Personnaz collection, which entered the Musée du Louvre in 1937 (SF 1937-30).

These landscapes quickly found the favour of private collectors (Duret, Murat, Doctor Filleau) and art dealers (Blot, Martin-Camentron, Vollard, Portier), judging by the catalogue of Guillaumin’s retrospective exhibition organised in Paris by the Galeries Durand-Ruel from 20 January to 10 February 1894, which included eleven paintings on the theme of Damiette.

The artist found inspiration in many subjects: the houses and streets in Damiette, the road, the fields, the trees in bloom, the peasants hoeing the land, planting cabbages or looking after the cows under an apple tree, depicted at various moments of the day and in different seasons. The road leading to the village was depicted about ten times under different daylight, and even at sunset, like the painting from the Ghez collection belonging to the Musée du Petit Palais in Geneva.

The year 1885 was a turning point, of particular importance due to the events in the art world, like the Delacroix retrospective exhibition organised at the École des Beaux-Arts in Paris, crucial for Pissarro and Guillaumin, choosing thereafter to give priority to colour and no longer to light; the forthcoming break-up of the Impressionist group, as each member took a more personal orientation; and the large number of paintings in which Guillaumin multiplied his experiments and colour effects, and progressively freed himself until he produced some pictures extremely rich in colour at the end of the 1880’s. It is also worth noting the important painting (perhaps a private commission) entitled The Road to the Valley, dated in 1885, of an unusual size for Guillaumin (117 x 89 cm), housed at the Musée du Petit Palais in Paris, which can be identified from a drawing, placed and dated “Damiette, 1884, ” belonging to a private collection.

Guillaumin remained close to Pissarro and Gauguin in his choice of subjects and in the evolution of his technique, as can be seen in their respective works. Gauguin’s painting Character on the Road, Rouen painted in 1884 is a good example of this, although Guillaumin’s different temperament is expressed in his rougher brushstroke compared with Gauguin’s softer touch.

Guillaumin liked rough landscapes with distinct outlines and bright colours. His brushstrokes are very different in the various parts of the painting: they are longer, are quick, nervous and distinct when depicting the grass, lumpy and sombre for the mass of leaves on the trees, wider on the road, lighter and fading in the sky. The contrast between both sides of the painting, with a warm palette with the dense tones of the ochres, the blues and yellows, brings out the lightness and brightness of the violets, pinks and yellows. Here, the artist’s palette lightens up, like Pissarro’s in that same period. The transition from the lower to the upper part is achieved through the brighter tones of the road, which serves as a link between them, and some touches of blue which echo the tone of the sky, reflecting the painter’s sensitivity and emotions.

All his life, Guillaumin based his work on the true, direct observation of nature and refused to submit to the fashionable taste of the moment and the commercial arguments of certain art dealers.

The Bridge of the Archbishop´s Palace and the Apse of Notre-Dame, Paris