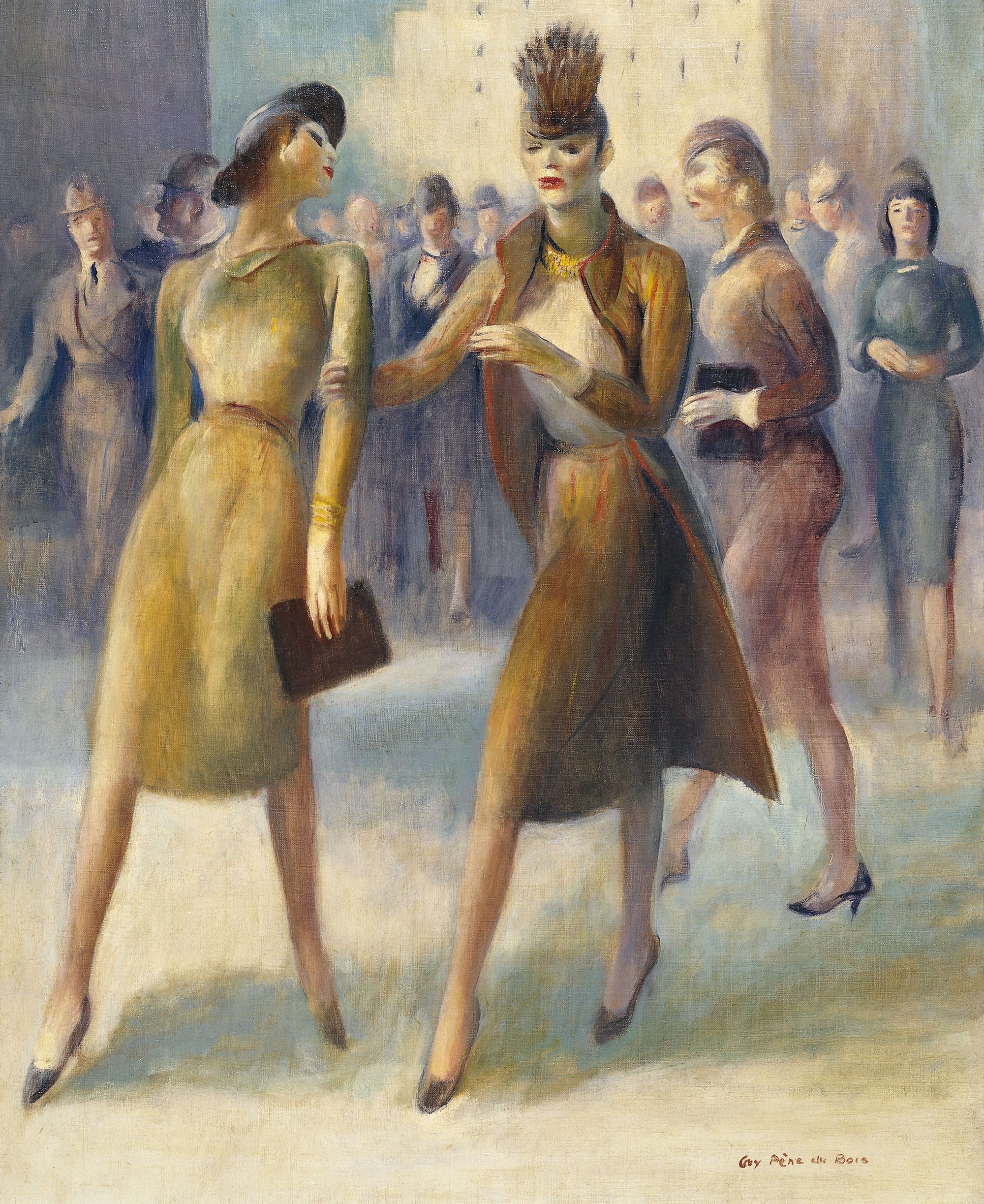 Guy Pène du Bois painted Forty-second Street in 1945, several years after he had suffered his second heart attack. He was painting less because of his poor health and his work was not selling well, causing him to terminate his relationship with the Kraushaar Gallery who had represented him for more than twenty-five years.

Du Bois was still a keen observer of human behaviour. He liked to depict people he might see passing by. These promenade pictures began as early as his first stay in Paris in 1905 and continue through to Forty-second Street. Americans in Paris of 1927 is very much in this tradition. At least one of the four women turns her face towards the artist-spectator. In Forty-second Street, we see more people and more faces; the sensation is that of the crowd rushing past in mid-town Manhattan in the heart of New York City.

The skyscrapers are visible in the distance reminding the viewer that these are New York’s sophisticated ladies elegantly dressed in the latest fashions. The artist has paid considerable attention to their dresses as well as to their hats, jewellery, high-heeled shoes and bright red lipstick. The two women in the foreground steal our attention; two more women on the right and two men on the left stand out from the crowd behind them. The strong sunlight and shadows on the pavement suggest that this is the lunch-hour crowd; their clothing suggests the moderate temperatures of either the spring or fall season.

No specific details in this composition reveal that the United States was just emerging from the Second World War, although Germany did not surrender until May 7 and Japan fought until September 2, 1945. At the time, Forty-second Street, which on New York’s west side traverses the Time Square theater district, had suffered the economic decline of the Great Depression. The neighbourhood around Time Square had already begun changing into a zone for vice. But du Bois gives the viewer none of the details found in the paintings and illustrations of New York by his contemporary Reginald Marsh. Instead, the people du Bois depicted resemble more closely the generalised figures of the early work of Edward Hopper, his friend and, years earlier, his fellow classmate at the New York School of Art.

Du Bois’s Forty-second Street is nonetheless filled with incident and the ambiance of New York. We see the woman on the right, dressed in an outlandishly feathered hat, catch the arm of the woman on the left who gracefully twists her neck, turning her face towards her companion. The casual gesture the woman on the right makes with her hand toward her friend allows her to wave her arm across the centre of this composition. This event holds our attention, provokes our curiosity, and animates the whole.