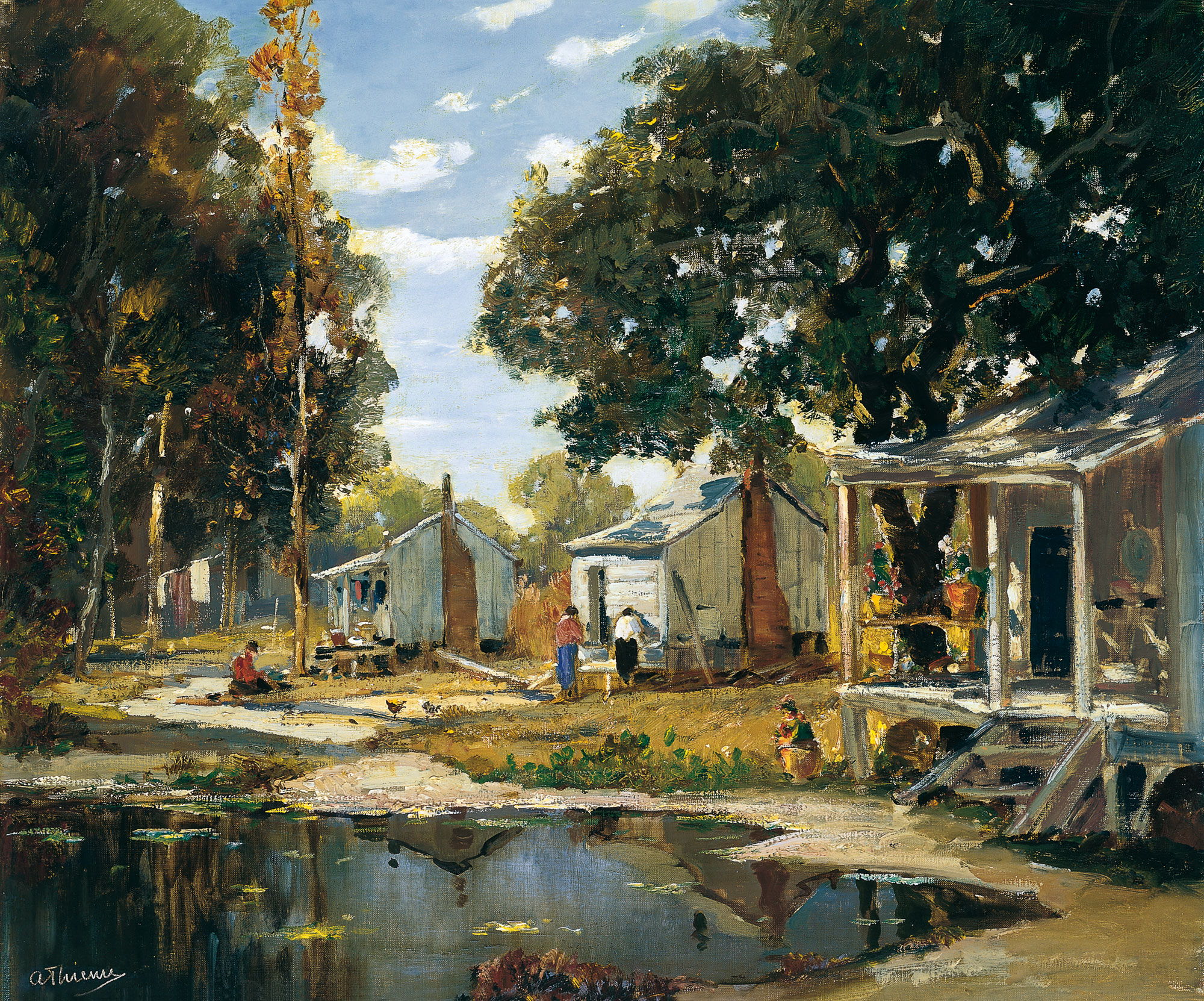 Anthony Thieme, born in Rotterdam, Holland, began his artistic training by sketching the historic buildings and canal life of that city. Throughout his career, he felt an affinity for old, picturesque buildings, painting the back streets and fishing shacks at Rockport on Cape Ann, Massachusetts, and the historic structures of Charleston, South Carolina, and St. Augustine, Florida. As his wife wrote of her husband, “He often said he was born fifty years too late. He disliked the rush and roar of the modern age.”

Thieme and his wife began to winter in St. Augustine in 1947. In his exhibition “St. Augustine and Nassau” held at the Grand Central Galleries in New York in November 1948, two of his paintings portrayed the dwellings of blacks in the vicinity of St. Augustine. Negro Cabins, no 14, is this painting; while no. 18, Florida Shanties, is most likely Florida Shanties, Palatka, Robert C. Slack Collection. The four-page brochure to the exhibition stated that “the artist, as he settles down in this city, finds tremendous inspiration not only in the gracious old city within the gates, but in the negro sections, at the docks, in the swamps, by the rivers.” In Thieme’s exhibition, “Old Charleston,” the year before at Grand Central Galleries, his paintings were primarily of the historic buildings of Charleston, including “Negro Church-Charleston.” It did not contain paintings of black life although the brochure accompanying the exhibition indicated its appeal for Thieme: “But the city itself is not the end. Plantation life was close to Charleston, so now ones drives through moss draped trees […] passing on the way, colorful groups of negroes who seem a happy part of its southern landscape.”

Thieme was not interested in a penetrating portrayal of black society as recorded in Eastman Johnson’s Negro Life at the South, 1859, The New-York Historical Society. His canvases were drawn to a more colourful aspect of the black community, unconcerned with the psychological and physical deprecations they endured. InNegro Cabins the figures are reduced to anonymous spots of colour, with only the title of the canvas and the ramshackle dwellings indicating the race of the inhabitants. A short review of the exhibition of his Augustine and Nassau paintings noted that they are “all lit by a bright sun.” As in many of his paintings, Thieme loved to depict reflections in pools of water and to sprinkle accents of red throughout his compositions. Within his sympathetic portrayal of black life in Negro Cabins, Thieme would have also felt a kinship for the roosters or chickens in the dusty, barren yard seen before the distant shanty. He wrote that he liked “animals, dogs, goats, (I have 4) chickens and birds.”

The gaiety and exuberance of Thieme’s scenes belie a more troubled existence for the painter who was despondent at the end of his life. After his show of scenes of “Spain along the Mediterranean” at the Grand Central Galleries at the end of October and early November in 1954, the exhausted artist journeyed to his winter home in St. Augustine. Stopping for the night at a Greenwich, Connecticut, hotel on 6 December, the artist shot himself the next morning while his wife was in the adjoining room of their suite.