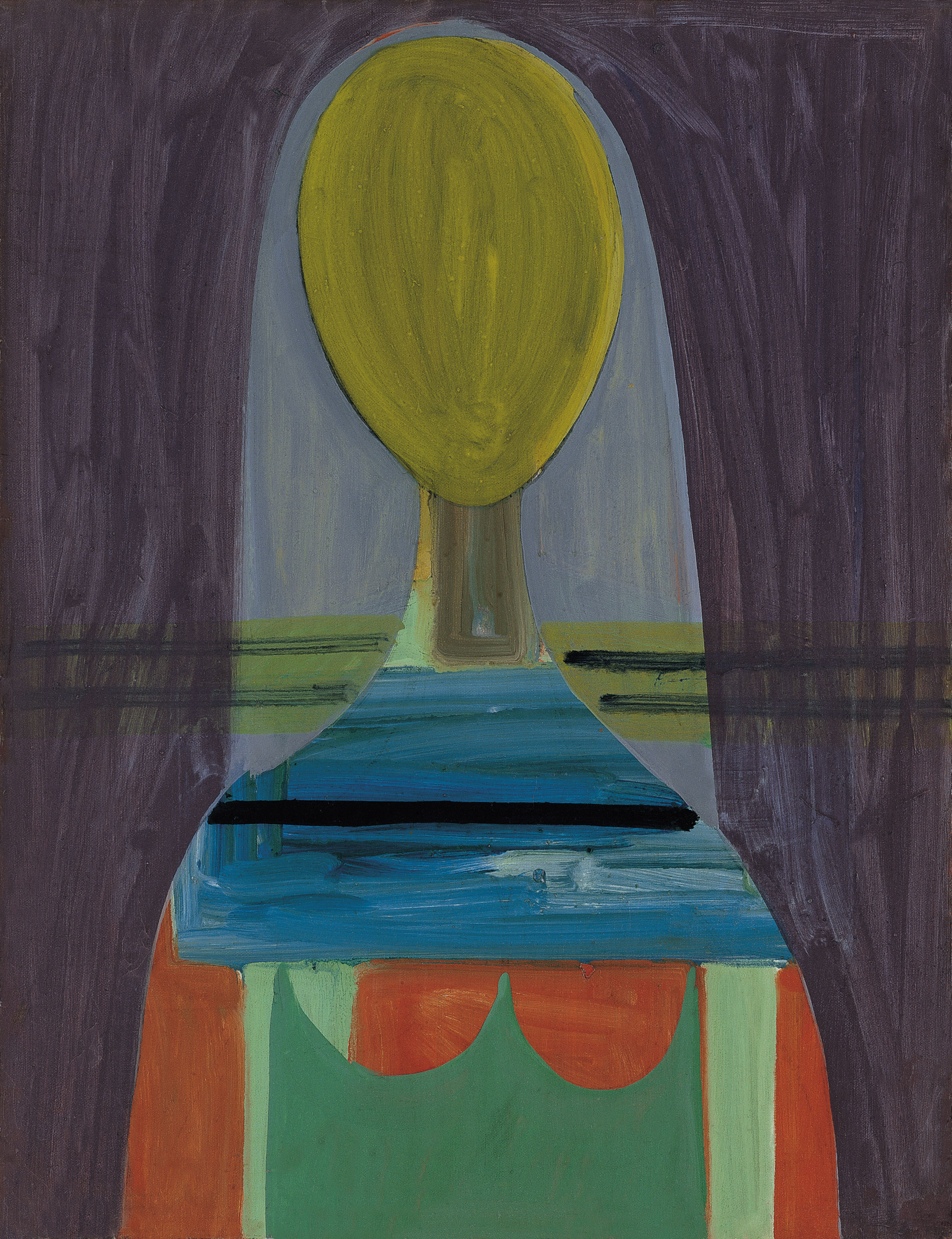 Wifredo Lam arrived in Spain in 1923, settling down in Madrid in order to pursue an artistic career begun in Cuba with academic studies. At the Prado he copied works by Velázquez, Goya and El Greco; he often visited the Archaeological Museum, and in 1937 he came across Romanesque art for the first time in Barcelona. His works, mainly composed of portraits and landscapes, were influenced during this Spanish period by Zuloaga, Anglada and Néstor, moving away from his original academicism and drifting in other directions. But it was during his sojourn in France that his memory of Romanesque and archaic art actually fused with other contributions. This painting was executed in Paris, where Lam moved to in 1938 after taking part in the Spanish Civil
War as a volunteer on the republican side. In France, his career reached a turning point with his assimilation of Cubismo Lam had known Picasso’s works since the latter’s exhibition in Madrid in 1936, but it was in Paris where he befriended him after calling at his studio with a letter of introduction from the sculptor Manolo Hugué. Lam came across African art thanks to Picasso, but this discovery only reinforced the primitivist slant which linked up with Lam’s Afro-Caribbean cultural background. The painting, executed when he had been living in Paris for a year, represents a full-face female figure which takes up almost the entire surface. With its rich colour, her schematic image stands out on a dark background. This woman, with an oval face lacking physiognomical traits, evokes a general, universal and indeterminate image. The clear structure of the form corresponds to a principie of geometric representation which the painter began to consider when, still in Barcelona, he came across reproductions of Cézanne’s works. When he was introduced to Picasso’s Cubism, this structural sense of form increased, although Lam never adopted the analytical faceting typical of Cubismo Picasso had praised the “huge primitive force” of his art, and Lam emphasised the “energy of the form” in Picasso’s oeuvre. The Cuban painter fused the practice of creating forms through the use of large planes of colour, with the primitive shapes of the African masks seen in the Musée de I’Homme, Paris” which he frequently visited with his friend Michel Leiris, and in which he confessed he felt “at home”. In 1939 he held his first exhibition in the Pierre Gallery in Paris, and a few months later he exhibited with Picasso in the Perls Gallery in New York. The paintings from 1938 and 1939 strongly suggest masks. They predominantly represent female figures, sometimes with child, taking up a very common motif at the beginning of the 1930s. The contours are generally sharp and strongly marked, with long lines defining majestically simple facial traits. However, in many paintings, as in this one from the Carmen Thyssen-Bornernisza Collection, the faces are reduced to colour patches with no details, only long sweeping brushstrokes with fairly diluted paint, which undermines any illusionism and gives the figure an abstract sense of majesty. As well as a clear development of both shape and colour through the assimilation of Cubism and Matisse’s Fauvism respectively, this painting, which previously belonged to Dora Maar, also has, like many other contemporary paintings, an element of spiritual potential which, although more developed in his later works, reminds us of how the Cuban painter had been influenced in the past by archaic statues, Romanesque art, and the paintings of El Greco. From the 1940s onward, his paintings, finally impregnated both with Surrealism and with the ritual force of his Caribbean roots, would see the complete fusion of modernity and Primitivism.