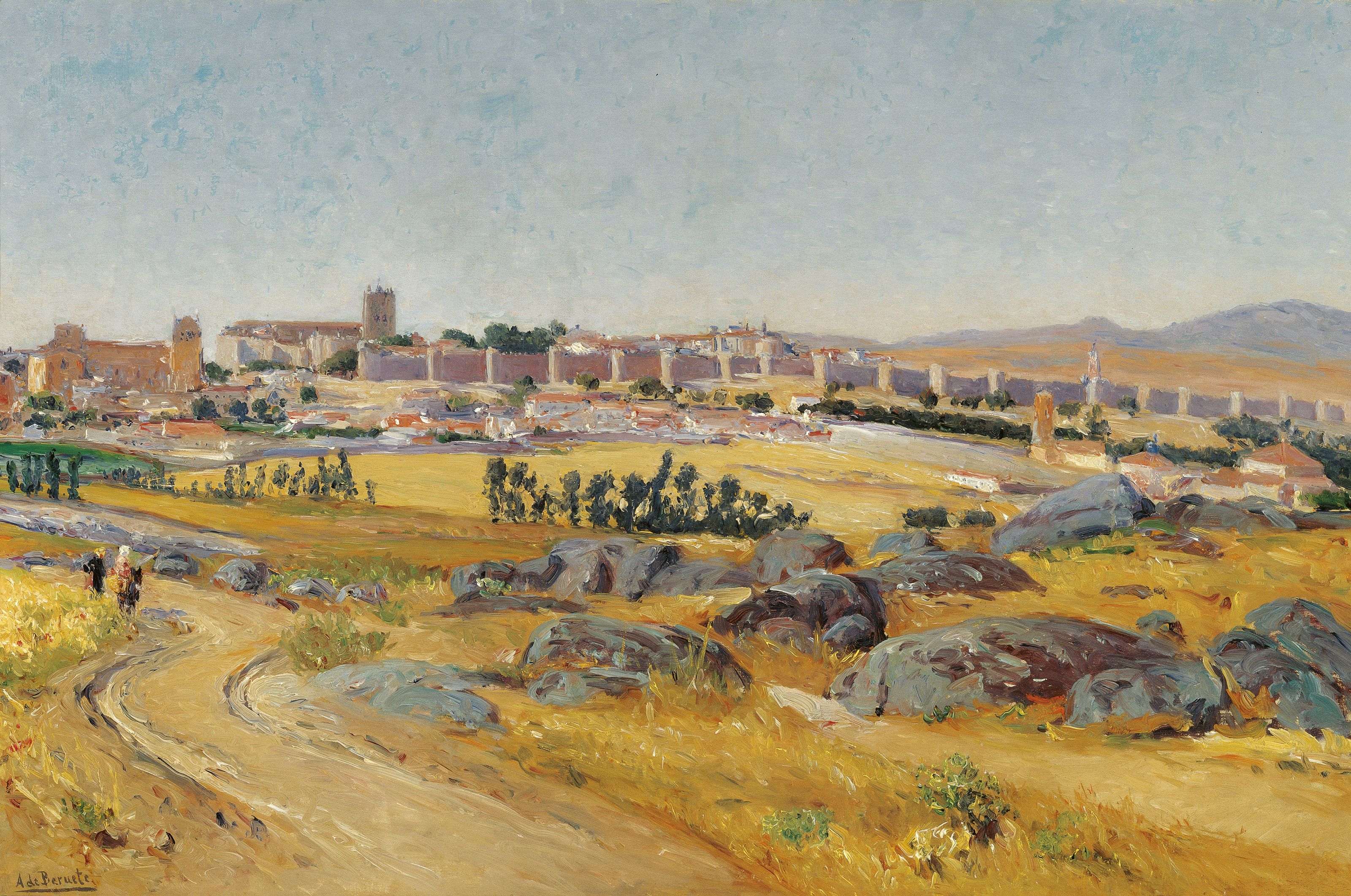 Aureliano de Beruete reached his stylistic prime relatively late in his career. Having remained faithful throughout his youth to Realism’s most orthodox precepts (subsequently developed into a précieux and decorative virtuosity in the manner of Martín Rico), it was not until the turn of the century, when he was over fifty years of age, that he achieved his most personal definition as an artist and total mastery of landscape painting. It was then that, with extraordinary pictorial intuition and absolutely independent experimentation, he began to assimilate the language of true Impressionism and so became one of the leading figures in the European landscape painting of the time. This despite the fact that his work received little recognition outside Spain in his lifetime, since, for reasons of character and a comfortable financial position, he saw little need to concern himself with promoting his work abroad.

This view of the city of Avila comes from that time of Beruete’s height in his mastery of landscape painting. It is a magnificent testimonial to the artist’s lifelong predilection for the Castilian landscapes to which he would devote the best of his production and which was reflected in the countless trips and excursions he was so fond of taking there.

According to a letter to his close friend Joaquín Sorolla dated 15 August 1909, Beruete travelled to Avila with his wife that summer after a stay in Vichy: “With our stay in Vichy at an end and the three days we spent in Madrid, we arrived here on the 30th and will remain until the middle of next month. As you know, I took a house and we are comfortably settled. I work as much as I can, painting views of the city and its walls. It is a grey, arid landscape with the yellows of parched fields and stubble. It is tremendously difficult to balance all this, but that is nature, the truth, and is always beautiful.” Beruete’s stay in Avila was especially productive, for he spent the whole time painting. He told Sorolla upon his return to Madrid: “I managed to make the most of the season, since for more than forty days running I painted in the morning, afternoon and evening with good – very good – light, almost all the time, although, on the other hand, I did have to contend with a wind that came to annoy me every afternoon until I finally lost that unyielding patience I have when I work out of doors. I have painted 20 things, seven on large boards.”

The artist’s words in the first letter admirably describe his concern when it came to planning this view of the Castilian city. Here Avila extends across the length of a high horizon with all its characteristic landmarks, from St Vincent’s Church and the cathedral (perfectly identifiable on the far left) to the mountains beyond the walls on the opposite side. However, the artist relegated the city’s monumental buildings to the distance, for he was more interested in the changing, rolling relief of the countryside around the city, which here extends to the foreground – that land “with the yellows of parched fields and stubble” so typical of the Castilian plain in summer. Beruete interpreted all this through his best technique – vibrant, supple, with rich impasto and essentially pictorial values – which he developed with extraordinary agility. It was based on brief, fitful dabs with the brush which barely suggest forms in an attempt to capture the effects of the light of the relentless summer sun of Castile on all the different elements of the plein air landscape.

Without a doubt this canvas was one of the fourteen paintings of views of Avila displayed at the posthumous exhibition organised by Sorolla at his own home in homage to Beruete. However, it is not possible to identify any of them with accuracy, due to the ambiguity of the titles and the absence of measurements in the exhibition catalogue.

Other titles of equally interesting landscapes with Avila, painted by the master during that stay in the city are: Ávila desde los cuatro postes< /span> (“Avila from The Four Pillars”), Paisaje de Ávila con las murallas (“Landscape of Avila with the Walls”), Avila, Vista de Ávila (“View of Avila”) and Una puerta en las murallas de Ávila (“A Gate in the Walls of Avila”).